The Art Punk Band – Zeno and the Happy Cats 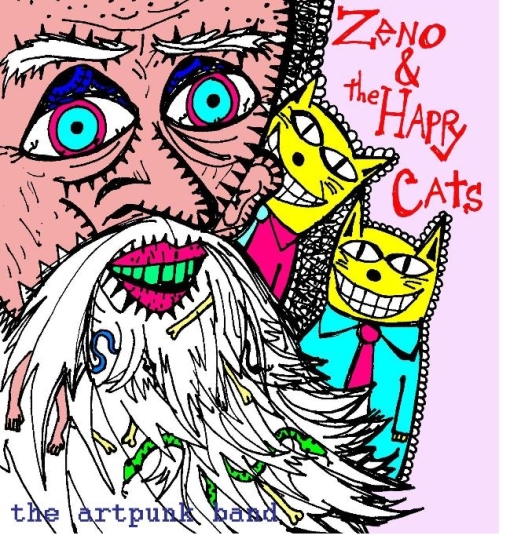 The Art Punk Band – Zeno And The Happy Cats (Jamendo)

A very definite example of an aquired taste today in the form of a short album release from American trio The Art Punk Band, who appear to have thrown themselves back in time a few decades to an era when musical perfection lagged far behind a self-convinced ‘good’ idea and a couple of friends.

Despite what the name may say though I’m not refering to the early days of Punk and nor, it seems, were the band when they set to work because musically at least there’s about as much Punk styling contained here as there is in a room full of Hippies weaving yurts out of organic yogurt. Although if you’re of the sort that considers Punk to have an ethos beyond just shouting and not being able to play the guitar particularly well then these folks can probably lay claim to some trace elements of it in their eclectic, disjointed, messily un-melodic tunes.

No, this is from an even earlier period of random noise making for the sake of it and even if they’re true musical forebears aren’t listed in that all telling litany of influences that is a MySpace page there’s still an undoubted trace of The Fugs about these guys. Not, of course, that anyone knows who The Fugs were given the hardened counter-culturalist corner of the Hippy music world they inhabited but the similarities stand (if you fancy following The Art Punk Bands family tree then I seriously recommend ‘First Album’ from aforementioned group for a taste of the grand-daddy of the sound on this album). And what sound would that be? Well again the best way to describe it is as an aquired taste because objectively speaking there’s very little to love on the musical side here which sounds exactly like what I expect it was, a stoned jamming session where nobody knew what song they were supposed to be doing or even what instrument they were supposed to be playing.

It’s messy, discordant, random and absolutely inconsistent but in a certain way it’s really rather great. Like The Fugs before them the joy here isn’t in the technical quality of what’s being done or the ability of those who’re doing it; it’s in the enthusiasm and indifferent joy that permeates each track. Whether or not there was ever any structure or plan for this album is slightly irrelevant because the experience of throwing it together was clearly an enjoyable one and that’s invested it with enough charm to make for a worthwhile listen. Assuming you’re not the sort to take offence at the absolute lack of coherency contained.

Lyrically it’s of the poetic, Hippy school, in equal parts half considered political daydreaming, surrealist rambling and stuff which made sense at the time of writing to the person who wrote it but which means nothing to anyone else. Again, not exactly a universally adored way of going about things but in amongst the chaotic musings there are some nifty lines and if you’re of a mind to do so, or willing to aid the process with the right substances, there’s a few bits which merit actual attention. And even without that attention the urge to grab a bongo and throw yourself into some random noise making should get to you for at least a few seconds during the course of the album.

And to the inevitable reaction of the majority of people who’ll see nothing of any interest here I say ‘well I like it’, so there.