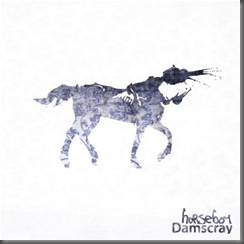 A while back now I took a listen to Russian Hip-Hoppers SCLWN’s album ‘Everything is OK’ and going by my half imagined memories and the fact that it’s still stored on my MP3 player I’m fairly sure that I said lots of nice things about it. I especially recall lavishing some, slightly scared, love on the music itself which had a nicely deep, intimidating almost industrial feel to it and, lo and behold, the universe has continued to serve my fetish for music to feel slightly unnerved to by giving me this EP.

Damscray (aka Albert Khasanov), the producer behind Everything is OK, has produced something else worth a fair bit of praise with ‘Horseboy’. Everything that could be said to be good about the production on ‘Everything is OK’ can just as fittingly be applied here and if anything it’s marginally more polished, which is only to be expected given whose solo project it is.

My only gripe would be to lazily say that it might have been nice to see a little more innovation given what it is, Damscray was free of any obligations to fit in with MCs this time but what he’s produced doesn’t seem to separate itself from the SCLWN work all that much. This can only be half a complaint I admit because I still like the style but I’m interested to see what else could be done, what direction this dark Electro/Experimental Hip Hop could take especially if done on a slightly bigger, less routine way. And that’s routine for what I’ve heard from Damscray, not routine by comparison to a lot of the godawful electronic music which seems to be the staple diet of the free music world.

To contradict all of that though there are some flourishes which seem to have developed separately from what he was doing for ‘Everything is OK’. It’s only a small few things, sporadic randomness which deviates from the overall feel of the EP but it works and more of that randomness certainly wouldn’t go amiss.